What is Mission Rock?

Mission Rock was originally a tiny island  in a portion of San Francisco Bay known as Mission Bay, south of the Oakland Bay Bridge.  It's part of a large serpentine rock outcropping which forms Potrero point and the much of the surrounding hilly area on the shoreline of the bay.  Here it is on a map from 1859.

In the 1870's, Mission Rock was developed as a grain terminal, and continually expanded over the decades.  Mission Bay itself was being reclaimed as landfill to accomodate major shipbuilding operations, a steel mill and freight terminals extending from the new shoreline.

These workers were loading grain onto Mission Rock in 1897.

Mission Rock has important history -- and is now destined to be a key part of the future of San Francisco.  That's why it's a perfect namesake for Mission Rock Digital. 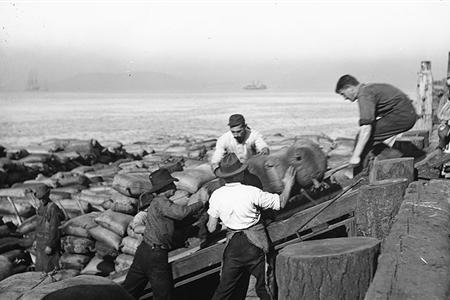 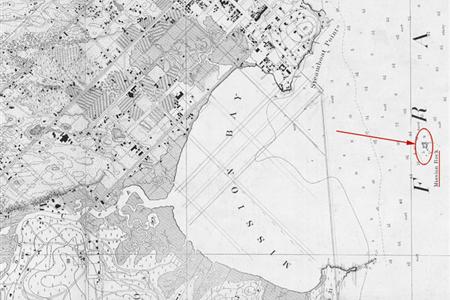 Because the San Francisco waterfront north of China Basin was fully developed, the port could only be expanded to the south, including what used to be Mission Bay.  One of the first large developments after the war was built in 1950.  That year, Pier 50 was extended to cover to old Mission Rock, creating the Mission Rock Terminal, a huge 20-acre $6 million project.  Here are some shots from 1955 to 1962, when the terminal was a key maritime commerce center.

The Mission Rock Terminal was memorialized  in the 1958 film noir classic "The Lineup" (even though IMDB incorrectly lists the location as Pier 41).   It's about a psychopathic gangster and his mentor retrieving heroin packages carried by unsuspecting travelers.

Today, the Mission Rock Terminal is still an active freight terminal, and the surrounding area is one of the last undeveloped waterfront sites in San Francisco. There are now plans to turn it into a mixed use industrial and residential complex, with the perfect anchor tenant:  The Anchor Steam Beer brewery, who is looking to expand from their current Potrero Hill location less than a mile away.

After World War II, the old grain terminals were torn down and burned to make room for future expansion.  Here's what it looked like during January of 1946.